I was blown away by the 2018 Saint Joseph. We’ll see if it matches the blockbuster 2015, but my money is on it being in the running for one of the finest to date. A blockbuster styled Saint Joseph with considerable power and minerality, it nevertheless has loads of class and elegance as well as classic aromatics of dark fruits, crushed stone, damp earth, and olive tapenade. Despite the warmth of the vintage, there’s a sense of coolness and elegance here paired with serious fruit that makes this wine special. Note, while the 2017 was 100% not destemmed, the 2018 was 10% destemmed.

Deep violet. Intensely perfumed, mineral-accented aromas of red and blue fruit preserves, licorice, exotic spices and potpourri, along with an exotic suggestion of incense. Stains the palate with concentrated black raspberry, cassis, bitter cherry and fruitcake flavors that are given spicy lift by a suggestion of white pepper. A violet pastille nuance emerges with aeration and carries through an extremely long, youthfully tannic finish that shows outstanding definition and mineral thrust.

Gonon's 2018 Saint Joseph is a tremendous effort that, according to Jean Gonon, was blended in March 2019 but won't be bottled until February 2020. Picked the second week of September, it weighs in at a balanced 13.7% alcohol, artfully combining aromatic nuances of black cherries, black tea, rose petals and licorice. It's medium to full-bodied, with ripe fleshiness surrounding a concealed spine of firm but ripe tannins—a structure to make it enjoyable relatively young yet capable of aging through 2035.

For good reason, this jewel of an estate has become a darling among critics, sommeliers and consumers alike, with the result that prices have escalated rapidly. Available not that long ago for less than $50 at retail, the regular Saint Joseph now routinely sells for more than $100. In fact, good luck finding it for less than that. The domaine named for their father is today run by brothers Jean and Pierre Gonon, with Jean typically taking the lead when it comes to hosting visiting scribes. We first tasted the reds, starting with the 2018s out of barrel. It wasn't an easy year, said Jean. "We had lots of rain in spring, a bit of mildew, but then no rain until the week of August 15. It rained 14-15 millimeters a few times, then it was dry the rest of the way." Whites were picked the first week of September, and reds the following week. As we progressed through the lineup, going first to bottled reds and then switching over to whites, Jean spoke at length about the importance of working the soil, the water-holding content of the subsoil and the contributions of various soil microorganisms to the health of the plant. It's obvious that the vineyards are where the brothers spend the bulk of their time and also where the future of this great family domaine lies. In certain years, Gonon makes a separate Vieilles Vignes bottling, and after not doing so in 2016 and 2017, it appears there may be one released from 2018. Given the minute quantities, collectors will need to work their trade connections hard to locate a bottle or two.

Or
This item is currently ONLY available on On Allocation, please enter a quantity and your maximum price to submit your Allocation request.
Product Trading History ×
Add Billing Address
< Back ×
×
Sign In/ Create An Account To continue Buying and Bidding. Please Sign In or Create An Account.
Add New Credit Card < Back ×
Sign In ×

If your bid is successful, you will receive an email notification of your purchase. The price you are bidding also includes delivery to the nearest Cru storage warehouse to the current location of the item. However, there may be an additional transfer charge to move the product to another warehouse for delivery.
Confirm your bid ×
Loading
Live Chat with a Cru Advisor
× 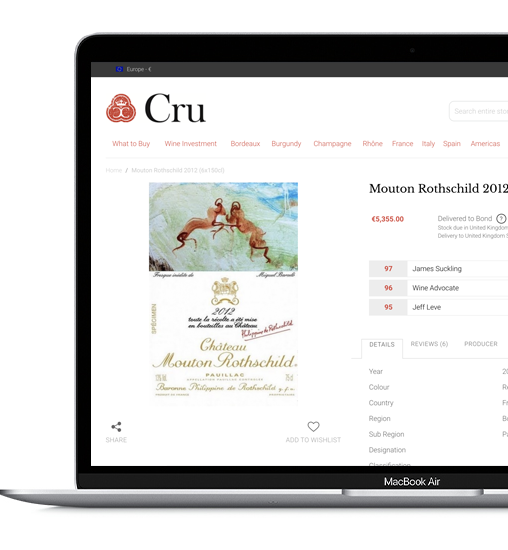